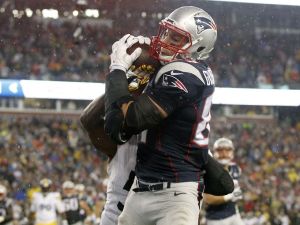 There is still a pair of games to be played on Monday night but what a start to the season we have had so far.

Did I mention that I wish there were doubleheaders every Monday night? I would love to see that and get rid of the Thursday night games all season long.

Maybe DeAngelo Williams isn’t as far over the hill as some folks thought. Of course, he goes right back to fantasy benches as soon as Le’Veon Bell comes off of his suspension.

If Rob Gronkowski stays healthy and plays all 16 games then I think some records are going to be broken. The Steelers had no answer for ‘Gronk’ and I’m thinking few teams do.

That resounding “thud” we heard was C.J. Anderson’s week one performance. Ouch!

Let’s back off the ledge folks, as it is only week one.

That other “thud” was the hit that ended Luke Kuechly’s week. That was a brutal looking concussion (not that there are any that aren’t, really) and here’s hoping Kuechly is back playing soon.

I bet there are plenty of good seats available on the Josh Hill bandwagon these days. Remember when he was going to be ‘the guy’ after Jimmy Graham was traded? Brees  had more targets then a drive by shooting in Chicago!

Not a bad way to start a career and a date with the hapless Browns next week to boot. Get him while you still can!

It was a rough day for speedy wide receivers as both DeSean Jackson and T.Y. Hilton suffered injuries that may cost them a couple of games.

The waiver wire will be red hot directly out of the gate trying to find replacements for Jackson and Hilton.

For my money, I like Donte Moncrief and Jordan Reed to benefit the most if both wideouts miss significant time.

Who says you can’t go home again? Not James Jones after his first game back as a member of the Green Bay Packers.

How happy do we think he is to be out of Oakland? I’d say happy as a tornado in a trailer park!

Speaking of the Raiders…no actually let’s not speak of Oakland. That game was ugly.

I hate to see Terrell Suggs (Achilles) go down for the season. “T-Sizzle” always makes games more interesting and exciting to watch. I just wonder, Could Suggs’ injury be karma for going after Eagles QB Sam Bradford‘s knees during a meaningless preseason game?

Is there a single person that is surprised that Brian Hoyer was pulled in favor of Ryan Mallett? Anyone? Anyone?

So, the St. Louis Rams beat the Seattle Seahawks, eh?

I’m guessing Kam Chancellor has a wry smirk on his face somewhere in the great northwest.

After banging the Frank Gore and Andre Johnson drums all offseason, I need to take a moment and wipe some egg off my face.

It’s still early and I actually still like both quite a bit.

Dallas Cowboys wide receiver Dez Bryant will have surgery Tuesday to repair a broken fifth metatarsal in his right foot, according to a source.The loss of Dez Bryant ratchets up the pressure on everybody with the Cowboys, including quarterback Tony Romo.

Cowboys coach Jason Garrett pegged Bryant’s recovery time as four to six weeks, which could keep him out until the Oct. 26 rematch with the Giants or the Nov. 1 meeting with the Seattle Seahawks at AT&T Stadium.

I bad-mouthed Bishop Sankey all offseason and am now admitting he actually looked good this week. Real good.

As long as his hamstrings hold up, Chris Ivory is going to put up solid fantasy totals. Then he will suffer some sort of hammy issue that causes him to miss time. It’s just what happens.

If Andre Ellington misses much time rookie running back David Johnson is going to be fun to watch.

Chris Johnson, not so much.

It boggles the mind that New Orleans couldn’t get to Carson Palmer for a single sack. This could be a long season for the ‘Who Dats.’

The Broncos and Ravens game was a bit of a hot mess. Actually, it was both offenses that were messes.

Baltimore needs to find another receiving option to play alongside Steve Smith or they are going to struggle all season offensively.

The Devin Funchess era is off to a bit of a slow start for Carolina.

So is the Melvin Gordon era in San Diego for that matter.

Ameer Abdullah is just fine in Detroit thank you very much. It won’t be long (next game even) before he is the official number one RB for the Lions.

The Dallas Cowboys and New York Giants game was a debacle for fantasy purposes unless you started the Giants defense or Jason Witten.

A lot of nervous fantasy owners awaiting news on the Dez Bryant front. A broken bone in the foot is never a good thing.

That’s the Travis Kelce we have been waiting for.

In fact, week one is officially ‘tight end a palooza’ week.

It appears that DeAndre Hopkins may be quarterback-proof if week one is any indication. I was worried that neither Hoyer nor Mallett would be able to get him the ball consistently. That was not a problem this week.

We do not believe in Percy Harvin again do we? Fool me once, Percy…

Admit it folks. You thought Nate Washington was retired before he put up triple-digits in receiving yards for Houston today.

Only three running backs topped 100 yards rushing so far. Yes, one of those was the aforementioned DeAngelo Williams.

LeSean McCoy owners hate on me for that last one.

Hmmm…. maybe year two of the Ben McAdoo offense in New York isn’t going to be all that.

Oh Eli Manning, I had such high hopes for you this season. NOT!

At least Peyton Manning had a big…wait. Never mind.

Oh, right. It’s still been only one game.

That’s what we all need to keep in mind folks because knee-jerk reactions at this point are fruitless.

Water finds its level and our studs will find their games.

Ok folks, those are a few things that jumped out at me this week.

May you receive all the fantasy points you need in the MNF doubleheader to win your matchup this week!