The Struggle is Real for Vikings Fans! 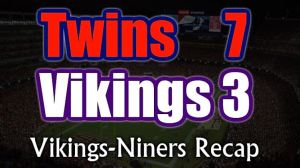 I am not a Vikings fan; however, after watching last nights game even I was frustrated.  I can only imagine what the loyal Purple Fans were feeling. The above photo pretty much sums it up!  TWINS WIN!

The Vikings 2015 Season got officially underway last night.  The results couldn’t have been more disgusting.  The Vikings lacked fire, looked lost, and just were not the same team we saw all preseason long.    Here are five areas of concern I have after last nights debacle, ranked from least worried to most.

Teddy Bridgewater had arguably the worst game of his career since Week three last season against Detroit.  He was extremely inaccurate with the ball and didn’t seem sure of his reads.  He was under constant duress and maybe that is why he wasn’t his normal accurate self.  As far as concerns go, this one worries me the least, for now. I am going to chalk his performance up to Game one jitters, being on the national stage, and poor offensive line play.  Sure hope this isn’t the start of a season long sophomore slump for Teddy.

Last night wasn’t the first time we’ve seen Adrian Peterson shut down by the 49ers defense.  They’ve always seemed to have his number.  What was more frustrating than the lack of big runs from Peterson, was the lack of carries.  Norv Turner seemed to want to establish the pass first, and Peterson really never got a chance to get going.  Expect a heavy dose of AP against Detroit, a team he routinely destroys. If not, Norv needs to have his fucking head examined.  This was, by far, a poorly coached game.  That being said….

The Vikings coaching staff’s performance was as bad as the players performance on the field.  This team was no where near ready to play last night.  They got owned in the both the trenches and seemed to believe in their own hype and expected to show up  and win.  From Norv Turner’s lack of use of Adrian Peterson early, to no defensive adjustments at half time, to Mike Zimmer’s bonehead decision to re-punt the football, the coaching staff had a very off night.  They have to get this figured out the next few days, or the 2015 season will already be in jeopardy as will their jobs.

Blair Walsh continued his kicking struggles last night.  He badly missed his first field goal attempt and barely made his second one.  Not sure what is going on with Walsh, but he’s got to get it figured out.  Eventually his kicking problems will start costing this team wins.  It is time to bring in some competition for Walsh, and if I’m Rick Spielman, I’m calling Kai Forbath and Caleb Sturgis to bring them in for a tryout.

This is something I noticed in the Preseason but it didn’t get much media attention.  The Vikings were routinely giving up big chunks of yardage in the running game all preseason and it carried over into the regular season opener.

Linval Joseph was specifically brought in to shut down the run game and he has been woefully ineffective in doing that.  The Vikings run defense made Carlos Hyde look like Adrian Peterson, as they were manhandled along the line of scrimmage.

Aside from Anthony Barr, the linebackers struggled as well.   Both Gerald Hodges and Chad Greenway were awful.  Greenway was on the ground pounding the turf in frustration often, as he missed tackle after tackle.  Gerald Hodges looked completely lost all game and needs to be replaced immediately.

This is by far the number one area of concern for this team and it needs to get corrected ASAP.  If the Vikings can’t stop the run, this is going to be one long, ugly season