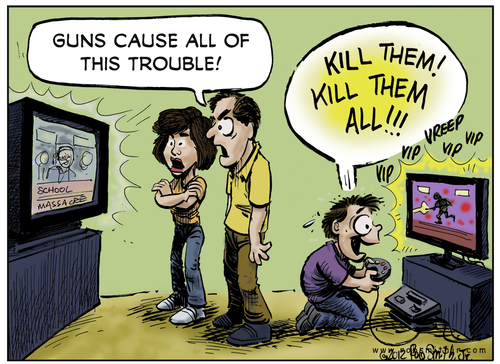 Well here we are, watching the horror unfold after another public-school shooting, and nothing will change because we as a society cannot reasonably talk about simple things so the hard things are impossible.  Thanks to all who’ve chosen to be offended by views they don’t like, micro-aggressions, and gender specific pronouns — you’ve taken the ability to debate this issue off the table.  Thanks also to the lobbying efforts of the special interest groups like the NRA or Anti-Gun groups who have shouted so long and so loudly there is no middle ground that offers possible choices.  There is only vilification and counter-condemnation.

Those who’ve read my posts on this subject know I don’t believe writing a new law will solve the gun violence issue in the nation.  We have all kinds of laws on the books that have done little to keep killers from killing, all they do is give us an opportunity to punish the offenders IF (and that is a big IF): the prosecutor choses to prosecute, the judge decides to judge fairly (putting personal agenda aside), and the defense attorney is not sharp enough to convince the judge and jury that his client is only a victim of society and it’s not his/her fault.  We now parse the laws with so many circumstances and uniqueness’s it is impossible to know if true justice is achieved.

The premise of our society is we are a nation of laws, but each day fewer and fewer of us actually believe we should follow the law.  As we see on the nightly news this holds true for even those who aspire or attain the highest elected and law enforcement offices of the land.  So, if laws no longer serve to restrain our actions, and we’ve established a morality that supports individual choice how do we convince people those individual choices should not include killing?

Those who cry loudest about the tragic rise in gun violence are the ones who have historically believed the answer is banning all guns.  It is as if they refuse to understand the human psyche that makes a banned item all the more attractive.  We attempted to ban the manufacture, sale and transportation of intoxicating liquors with the 18th Amendment.  How did that work out? The words “speakeasy, bootleggers and organized crime” entered our language.  A completely sober USA, not so much.  How did the war against drugs work?  I digress but I think you get  my point…

When President Obama attempted to explain who the average rural American is by saying “They get bitter, they cling to guns or religion or antipathy to people who aren’t like them or anti-immigrant sentiment or anti-trade sentiment as a way to explain their frustrations.” He set a tone for his entire administration that said we know better than you what is right for the country.  As a result of that sentiment what happened with gun sales during his eight years in office?

Those who oppose the anti-gun side always seem to suggest the problem of people who are killing other people is obviously a mental illness issue and if we were to just treat that everything would be okay, the guns are never the issue.  While mental illness is undoubtedly a contributing, and perhaps causal factor in many of the shootings, what happens when the media gives so much air time to the individuals, and next to no air time when it comes time for them to face the consequences of their actions which, if they survive, may not come until decades later? See my previous post about the media and shootings here.

Now I am just guessing, but I bet that the anti-gun folks will plaster social media with their outrage since emotional reaction is pretty easy.  ABC News Tonight made it a point that each time President Trump responded to a shooting he said that immediately following the event was not the right time to discuss the issue, they did this as a not so subtle condemnation.

Anyone who thinks rationally about this will know two things.  Unique to this instance, until we know what actually happened what is there to talk about, other than the emotional outrage?  The second point is really what the pro-gun groups are working towards, the news media will forget about this in a week or so and it will move to the back burner, at least until the next shooting, where the cycle will start all over again.  Our agenda driven society, and especially the two mainstream parties cannot engage in reasonable talk without suffering the wrath of their most extreme advocates, so they won’t.

The fact we have no middle ground on this issue will mean it will never be fixed.  Whether that is improved mental health care, a realignment of our moral compasses, universal gun awareness training, or perhaps increased armed presence in the schools.

There are a number of problems with that last option that makes it an unattractive choice, but of the ones I mentioned it is the only one likely to be sought because it is the simplest and keeps in place most of the status quo.  At the end of the day, I don’t think any of the choices I’ve heard mentioned will actually eliminate the threat.  That can only come if we as a society choose a different morality where our young are not taught on a daily basis that gun violence is acceptable, where the family unit is rebuilt to provide stability for growing minds, and we abandon the idea the government is responsible for fixing everything that disturbs us.  That seems an impossible path at this point.