McCain’s “Maverick” Fuck You to Trump 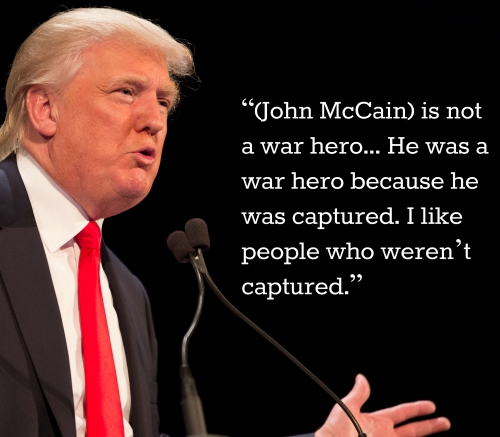 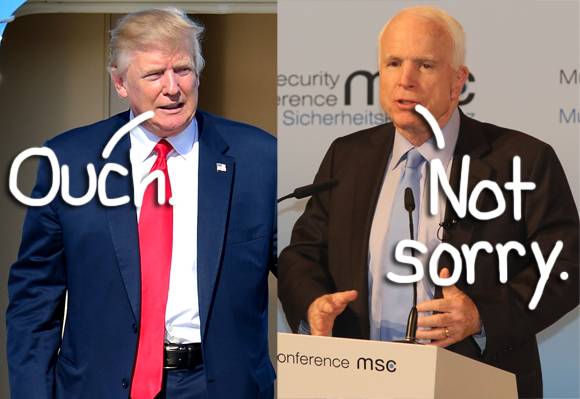 John McCain is the most unusual political character of our time, President company excluded. He has been a conscientious conservative, a rank-and-file Republican, an across-the-aisle kind of bipartisan, and a zombie presidential candidate. McCain was a prisoner of war in Vietnam, withstanding five horrendous years in captivity. He is a genuine hero and an American legend.   This week, after receiving the awful news that he has a fatal brain tumor, he boarded a plane and returned to Washington, D.C., to play assassin to the Republicans’ calamitous effort to unravel the Affordable Care Act. McCain again played the hero in preventing his beloved Senate from shooting itself in the head.

McCain is one of the few big-name politicians who keeps things interesting by keeping us on our toes. His willingness to buck party leadership earned him the nickname, “Maverick,” a sobriquet he embraced.  His political story will be an interesting one to tell. Unquestionably, he is a hawk and a fiscal conservative. He also believes in  tolerance and respect for the beliefs of others.  Nevertheless, he caucuses with many politicians who do not.  One of his signature moments occurred in the late days of his unsuccessful 2008 Presidential campaign.  When an ignoramus called Obama an Arab during a town hall event, McCain quickly reclaimed the microphone and extolled his opponent’s decency.  Yet this is the same man who put an obviously unqualified Sarah Palin on his ticket – one long, lingering look from the Bering Strait and  a single heartbeat from the Presidency.  McCain is the person responsible for letting loose the hounds of nativist amateurism on Presidential politics.

After losing the 2008 race and despite his civility toward Candidate Obama, McCain became a constant critic of the President.  In 2012, McCain won a tough race for a sixth term in the Senate, He made the repeal and replacement of Obamacare a prominent plank in his platform.

McCain is the son of a soldiering family, one of whose members fought alongside George Washington.   An Annapolis graduate, he served as a navy pilot in Vietnam.  After his plane was shot down, he was a long-term guest at the Hanoi Hilton, As a high value POW, he had a chance to be released, but he wouldn’t trade on the status  of his Admiral father. He refused preferential treatment.  After five years of physical and mental torture, solitary confinement and abuse that eventually broke him, he was released in 1973. This is the man belittled by Candidate Trump, who prefers his heroes not to be captured.

McCain held his water, though.  He would never have been a Trump supporter in any normal time but the 2016  election was anything but normal. He threw his support beyond the military school brat who kicked dirt on his reputation, while the only thing to capture the Hypocrite-in-Chief was an Access Hollywood microphone.

Two weeks ago, McCain flew home to Arizona to have eye surgery, during which it was discovered that he has an inoperable brain tumor, the same type of cancer that killed Ted Kennedy.  The Senate faced the threshold vote on its healthcare bill, a bill so bad it was kept out of sight for as long as possible.  With two certain GOP defections (Collins, Murkowski), an absence by McCain would have doomed the opening gambit, called a motion to proceed.  Earlier this week, McCain returned to the Capitol, struggling physically but resolute to attend the roll call.  McCain joined his party’s vote, ensuring that debate on a bill would take place.  However, Majority Leader McConnell struggled to find common ground between his party’s conservative and alt-right factions.  Two proposals failed to garner enough votes.  On Thursday night, he called for a vote on the so-called skinny repeal, a rollback of Obamacare so marginal that it was only a placeholder to get into a conference with the House over its own odious bill.

When called to vote on the skinny repeal – no replacement, McCain voted no.  He remained consistent with his position that the law was insufficient because it failed to repeal and replace.  But the no vote gave the Maverick the added pleasure of driving  a retaliatory ice pick or into the neck of the future ex-president. Trump’s plan to repeal healthcare died with McCain’s fuck you vote. He trumped the President at his own game of political theater. To say the President was enraged doesn’t begin to tell the story. The White House Chief of Staff was found the following day floating in the Potomac.

While the amendment would have repealed some of Obamacare’s most burdensome regulations, it offered no replacement to actually reform our health care system and deliver affordable, quality health care to our citizens.

McCain hasn’t talked about whether he drew any personal satisfaction from defeating one of the cornerstones of the Trump agenda.  But he exhibited the kind of grit that his hosts at the Hanoi Hilton would recognize.