I Give the Dolphins Draft an A- 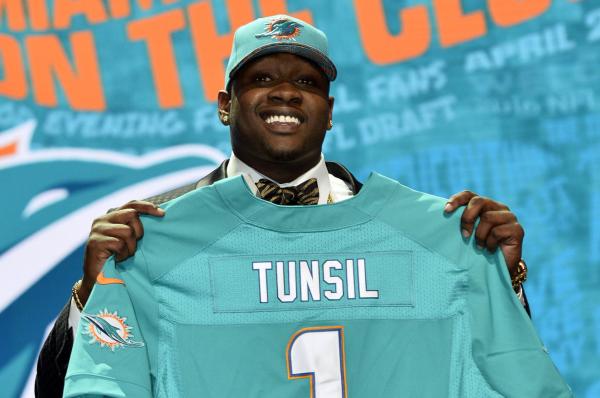 The quick answer for why the Miami Dolphins haven’t won a playoff game in 15 years is their drafts. They’ve been consistently awful. So either I’m suffering from the Kiper Complex – that silly notion you actually know what you got on draft day – or the Dolphins actually came out of Sunday’s with marked progress for the new regime.

A good portion of that was the good fortune with the first pick. Laremy Tunsil was rated the top player in the draft by many. The Dolphins only got him at 13th because of the gas-mask video posted on his Twitter account just before the draft. If this isn’t Dion Jordan II, if the Dolphins did their homework and life-coach him in the coming years, Tunsil solves a major problem this year and an even larger one starting next year. He also potentially provides them with a Pro Bowl-caliber player rather than an average starter.

Guard play was the No. 1 problem for the Dolphins last year as rated by the front office. Now Tunsil will move into guard. This isn’t that unusual, a highly rated tackle playing guard. Dallas’ two guards, Zac Martin and La’el Collins, were tackles in college. Hall of Fame left tackle Jonathan Ogden started his NFL career at guard. So the Dolphins won’t just solve the guard position for today. They also solve left tackle when Branden Albert likely leaves after next season. This was manna from heaven for the Dolphins.

Second-round pick Xavien Howard fills a desperate need at cornerback. Howard brings the size and ability in press coverage that fits the Dolphins scheme. In fact, there’s the idea that covers much of the Dolphins draft picks – they got guys who fit their scheme.

One issue was not enough defense. Well, there weren’t enough picks to cover what the Dolphins need. And, remember, their offense was 27th in scoring last year and lost Lamar Miller (10 TDs) and Rishard Matthews (four TDs). They needed a running back and third-round Kenyan Drake is a complementary player to Jay Ajai, a pass-catching back with good speed. Receiver Leonte Caroo? Yes, there were bigger needs elsewhere. But the Dolphins receiving corps isn’t deep and Kenny Stills is a free agent in 2017. So if Caroo has value late in the third round, he’s a fine pick.

What you noticed in the Dolphins picks, including 5-6 receiver Hakeem Grant to receiver/tight end Thomas Duarte, was the idea Gase could use them for mismatches. They even took a hometown quarterback in Brandon Doughty in the sixth round to groom.

The bottom line is this draft was a surprise from crazy Tunsil pick. You also expected more defense. But when you add up what they’ve done this off-season it comes together. They gambled on the health of Kiko Alonso and Byron Maxwell’s size and talent from his Seattle days will be a better fit for their defense than in Philadelphia. They drafted to mainly help the offense. You never know. But that’s why I graded the draft an A-.