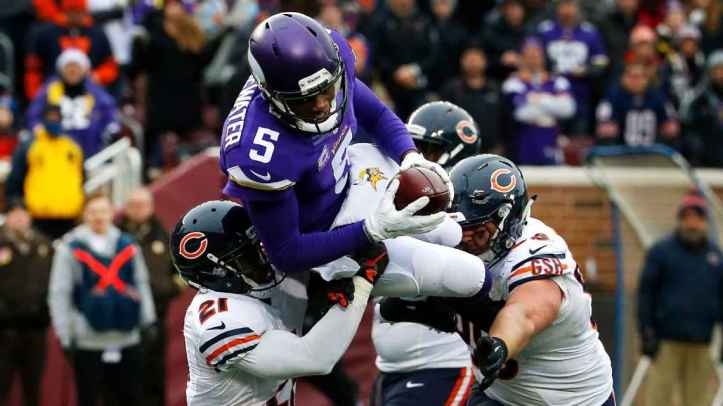 The fantasy football playoffs are in full swing and things are getting wacky and wild!

Fantasy owners were forced to try and figure out which backup running backs would come through at crunch time.

I’m guessing no one started New England’s Joey Iosefa and plenty of folks started Brandon Bolden. Sigh, thanks, Bill Belichick. We shouldn’t be surprised by Belichick’s tomfoolery when it comes to his running backs. That’s the reason I’ve shied away from James White in daily games.

I’m also going out on a limb here and say not many folks rolled Mike Gillislee out this week. Don’t forget about Karlos Williams who matched Gillislee’s four carries (41 yards).

LeSean McCoy owners better sprint to the waiver wire this week for the kid.

That was a nice performance for Tavon Austin, totaling 73 yards on his eight touches and scoring twice. Austin certainly made those owners brave enough to start him very happy. ‘ole Toad is playing against such owners this week. Lucky me.

Some folks were losing faith in Mike Evans but hopefully didn’t sit the kid. He and Jameis Winston are going to be a very nice fantasy duo for years to come.

After having given him a hard time in recent articles, I will admit that Case Keenum actually looked good against Tampa Bay. Yes, that was difficult to write. No. We don’t ever start Keenum for fantasy purposes.

That was not the game that Chris Ivory owners were hoping for. Ouch.

Eddie Lacy owners would also like to join this club. Blegh.

While he didn’t have a sack this week, Aaron Donald continued to be a disruptive force and is quickly becoming the J.J. Watt of defensive tackles.

Dallas should give Roger Staubach a call. He stays in shape and can’t be worse than what Dallas has been rolling out at quarterback. ‘ole Toad is showing his age, as the Cowboys could also call Troy Aikman who’s about 25 years younger than Staubach.

Another week and another Eric Decker touchdown … yawn. The man has been money all year long. This never would have been the case if not for IK Enemkpali.

Kirk Cousins gets it done this week with his arm and legs. “You Like That!”

I also like a five-touchdown week from Teddy Bridgewater. It’s too bad a lot of owners likely had Cousins and Bridgewater on their bench.

We certainly weren’t anticipating a Zach Mettenberger sighting as well as a Brandon Weeden appearance. More unexpectedly, they both performed OK.  I wonder how Dallas fans feel after seeing Weeden lead Houston to a win. Maybe Jerry Jones was right in is glowing assessment of Weeden.

Did anyone else sit Sammy Watkins in favor of Doug Baldwin?  Really? Was I the only one? Sigh.

Adrian Peterson owners have to be sick after seeing Minnesota score 38 points and not one touchdown for their running back that also tweaked an ankle. Minnesota took Chicago to the wood shed and Peterson wasn’t involved… Sometimes things just don’t work out.

Congratulations to all those Rashad Jennings owners who stuck it out and started him this week. I kid, of course, as no one was starting Jennings this week.

What a game it was between Carolina and the New York Giants.

That was Johnny Manziel cutting through the Seattle defense like a hot knife through butter. Cowboys’ owner Jerry Jones could be seen tearing up at about this time. I may be prone to a bit of hyperbole. It’s the holiday season. What can I say?

Just when it appeared that Brock Osweiler was back in fine form, he suffers a shoulder injury but does return to the game. Then does nothing in the second half. The Peyton Manning watch is officially on.

That’s the Jeremy Hill we know and love.

Miami is going to get Ryan Tannehill killed before the new coaching staff can be named. He took some huge hits this week and is one tough customer. That doesn’t change the fact that Miami is terrible, but he is a tough kid.

Welcome back to the big time, Emmanuel Sanders. Too bad that your performances in the previous two weeks likely eliminated any teams you are on. The same goes for you, Amari Cooper. It’s too little too late after the goose egg you gave us last week.

Can we just give the MVP trophy to Cam Newton already? The man is flat-out dominating. He scored 51 fucking points in my league against me for my opponent. Not to often you score 117 points as I did and fucking lose. All thanks to Cam the Man!

The Bryce Brown hype train is officially off the tracks.

Christine Michael appears to be the Seattle running back we want moving forward. Yes. It’s a ‘Back to the Future’ situation for sure.

Paul Posluszny had a nice bounceback game after missing a week following hand surgery. That man always gives his all.

I wonder how elite Mike Pettine feels Russell Wilson is now? I wonder what would happen if Pettine designed an offense around Johnny Manziel? The boxes will be delivered to his office promptly following Week 17. Pack them and go.

I’m not going to lie to you, folks. A.J. McCarron is going to hamper A.J. Green’s fantasy value moving forward.

Nice to see James Jones has a nice ‘revenge’ game against Oakland. Does anyone remember when Randall Cobb was a big deal?

Poor Navorro Bowman. Another double-digit tackle performance in another lopsided loss for San Francisco. That makes me sad. The man has come back from a hellacious injury and is stuck on that team.

Hey! Atlanta finally won a game. Wait … are we still caring whether or not Atlanta won?

I know we do like the games Julio Jones and Devonta Freeman had.

Oh, Carson Palmer why do you forsake us? Arizona put up 40 points and Palmer only had a single touchdown. Hopefully Tyrann Mathieu is OK heading forward because the Arizona defense as well as Individual Defensive Player (IDP) league owners need him down the stretch.