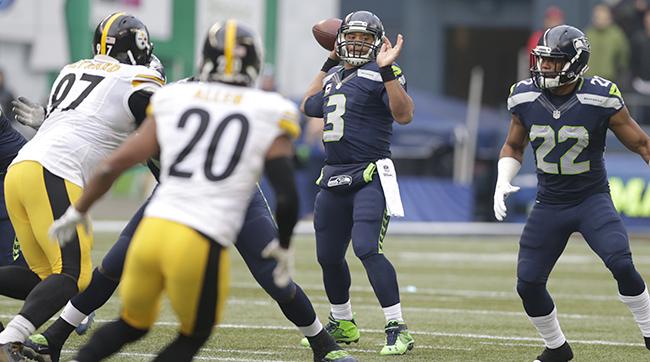 Week 12 was another injury filled affair with many big name players on both sides of the ball being knocked out. The last few weeks have been a full-fledged battle of attrition as we move closer to the fantasy playoffs.

Hate to see Rob Gronkowski carted off with what appears to be a knee injury. Fantasy impact aside, the game is just more fun to watch with ‘Gronk’ playing.

Tom Brady now has fewer receiving options than Matt Schaub in Baltimore.  The New England defense isn’t doing much better with Jamie Collins and Dont’a Hightower both on the shelf as of now. This is a battered Patriots team that lost tonight. While we’re on the topic of the Patriots. How did Belichick not know the rule about the clock running on an ‘excess timeout?’ I’m not saying that I knew the rule, but Belichick takes pride in being smarter than the rest of us.

The Brock Osweiler era is off to a very nice start. Let the QB controversy begin in the Mile High City.

It will be interesting to see what Ameer Abdullah does down the stretch with more playing time. He looked pretty good this week. Of course it was against a circling the drain Philadelphia defense.

So Matthew Stafford and Jameis Winston have hung five passing touchdowns on the Eagles in consecutive weeks. Should we go ahead and pencil in ten for Tom Brady next week when New England hosts Philadelphia? Nah. Not with the aforementioned depleted receiving corps.  Brady likely still hits the five-touchdown mark though.

At least Mark Sanchez was only the worst quarterback to play on Thursday for an hour or so. Then that honor quickly and clearly went to Tony Romo and then he went down again to injury. Ugh. It’s over Dallas fans. The dream is over. Now show some guts Jerry Jones and send Greg Hardy packing. The man is a disgrace and should not be in the league. Yes, I am talking about Hardy not Jones.

What a game by Ziggy Ansah. His IDP owners are grinning like the butcher’s dog.

While we are handing out plaudits… Welcome back “Megatron!” That was the game your owners have been waiting for. The Carolina Panthers defense flat out gets after the ball don’t they?

The ball-hawking Luke Kuechly looked like Charles Woodson with a pair of picks and his first career touchdown.

With Matt Cassel back under center look for more big games from Cole Beasley than Dez Bryant. Yes. I am serious. Cassel is a dink and dunk game manager. Think Alex Smith ‘lite.’

Is it me or does Davante Adams do less with his targets than the average wide receiver? The kid looks shaky and is likely to lose Aaron Rodger’s confidence very soon.

I know he lost a fumble and nearly flicked the ball away too soon on his score but Eddie Lacy is looking more and more like his old self. Yup, still out of shape, but effective. Unfortunately with James Starks playing so well, Lacy’s fantasy production will continue to be capped.

Speaking of looking like their old self, C.J. Anderson is looking like he did at this time last season. He could lead a lot of fantasy teams to playoff glory with the way he looked tonight.

The Bears may want to speed up the transition from Matt Forte to Jeremy Langford. The rookie looks more explosive to ‘ole Toad. Of course, I may be biased as I have him on two teams. Langford was a little messy in the passing game this week. The fact the Bears were penalized as much as they were and still won the game is amazing. I saw more of Ed Hochuli on Thanksgiving Day than my family.

It’s back to worrying for Packers fans after they have now lost at home to both Detroit and Chicago in the last three games. Or do we just chalk this loss up to a Brett Favre was in the house ‘curse?’

That hit Calvin Pryor put on Rishard Matthews was so hard it hurt me here in South Dakota. The kid out of Louisville can bring the wood. Ouch.

Tevin Coleman giveth…and Tevin Coleman taketh away…on the same play. Have to get those ball security issues under control rookie. The Falcons are taking on water…fast!

Another week and another circus catch for Odell Beckham Jr.

Is any team going to step up in the NFC East?

Philip Rivers had a heck of a week despite a lack of receiving options.  Well, he did have Antonio Gates. Rivers knows what side his bread is buttered on and looked Gates way often. Unfortunately, Danny Woodhead was pretty much M.I.A once again.

Let’s hope Allen Hurns is OK after that scary concussion. Always hate to see the stretcher come out.

A tough season for Jimmy Graham has ended with a torn patellar tendon. Sadly he was having one of his better games when he went down.

The Steelers defense was doing its best New Orleans Saints impression as Russell Wilson tore that secondary up. I can’t believe I didn’t start Wilson, UGH!   The “Legion of Boom” wasn’t much better giving up over 450 passing yards but did have some picks along the way. This game was a surprise shootout.

Hello there Spencer Ware! The Chiefs are a fantasy running back creating machine this season as the kid stepped in and had a very good day.  Just imagine the numbers Jamaal Charles would have been putting up had he not gotten injured. Actually, if you own (or owned) Charles you probably don’t want to do that. It will only bring tears.

It was a nice game in a losing effort for Tyrod Taylor. It’s just too hard to trust him to get it done on a consistent basis in that offense.

It is a nice week to be a former (or current for that matter) Michigan State quarterback. Both Kirk Cousins and Brian Hoyer led their respective teams to victory. I expected a much bigger day from Hoyer against the Saints though.  For that matter DeAndre Hopkins under-performed badly as well.

It was a tough day for Todd Gurley as the Bengals bottled him up. That is going to happen more and more until the Rams get a viable quarterback.  Nick Foles and Case Keenum have proven they are not the answers. Not even close.

Apparently Marcus Wheaton was the Steelers wide receiver we needed to start this week. Eagles coach Chip Kelly has made some bad moves as GM in Philly, but trading Nick Foles for Sam Bradford wasn’t one of them. That deal is a wash…salary aside.

Too bad I was pimping Martavis Bryant as that guy all last week.  In my defense, Bryant did have a touchdown (rushing) and Wheaton’s ridiculous yardage numbers were only slightly less than DeAndre Hopkins, Larry Fitzgerald, Antonio Brown, Demaryius Thomas and Julio Jones combined totals.  It was not a good week for the elite wide receivers to say the least.

It looks like rookie David Johnson may be the last man standing in the Arizona Cardinals backfield. He will be the hot waiver wire add this week.  Was that Carson Palmer or Steve Young running that ball in for a score today?

After the great Sunday Night game we had this week we could be seeing a Matt Hasselbeck led Colts team against a Steelers team with Landry Jones under center. Ugh. Get better soon ‘Big Ben.’

Tip of the cap to Doug Baldwin on his three-touchdown performance. I’m guessing we don’t see that again anytime soon.