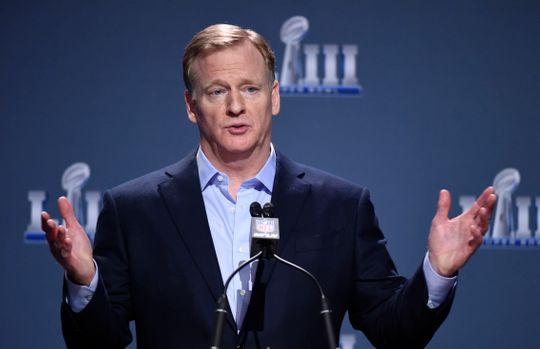 Another fucked up state of the NFL speech…. dodging answers blah blah blah….

By now, calling for Roger Goodell’s ouster is about as futile and empty a gesture as demanding the Redskins change their nickname. Ninety percent of all columns are wishful thinking, and that’s no different for me or any other dumb fuck with a blog who is sick to death of this man and would shit hot knives to see him leave office. I remember sitting here  years ago when the Ray Rice scandal blew up in Goodell’s face, posting a boilerplate FIRE GOODELL rant, and hoping beyond hope that NFL owners would convene in their volcano war room and agree to rid themselves of the Ginger  DIPSHIT once and for all!

But they didn’t, and they likely never will. Goodell has been good to his bosses—crushing unions and muscling out favorable concussion judgments—and they have repaid him with their undying loyalty. We are stuck with him for a long time, no matter how badly he fucks up, if the Kareem Hunt mess is any indication.

The shame of it all is that it doesn’t have to be this way. The shame of Roger Goodell’s “victories” is that is has completely blinded his masters to his faults, and to the idea that the NFL can survive—and survive comfortably—without him. Given the current state of both ratings and game quality, it’s clear (at least to me) that Goodell’s consolidation of power has had a hugely damaging long-term cost to football. A lot of people fucking HATE this league, even if they like the sport of football itself. And the NFL didn’t have to become hated in order to be wildly successful. There is an alternate universe somewhere out there that features a Goodell-free NFL: a league that’s just as lucrative and popular as it is now, without a raging dickhead in charge to piss everyone off. And I know this is could be OUR reality, because I  saw another league free itself from its own tyrant.

Consider that the NBA season is rolling, and that league is cresting on an insane amount of good will thanks to likable stars,  kickass Finals, thirsty-ass basketbloggers tweeting nonstop, and a low-key commissioner who is NOT a raging prick. It wasn’t that long ago that the NBA was unthinkable without David Stern. He was a soulless autocrat determined to bend players to his will, but he made the league lots of money, and therefore he was considered essential to its fortunes. Like Goodell, Stern treated his players like unruly children, and fans followed suit.

But, shock of shocks, it turns out that the sport of basketball was not wholly reliant on a single executive to thrive. Who would have guessed? Who could have known that some off-the-field pencilfucker can only get in the way of the product? I bet NBA owners never realized how good they could have it until Stern went away.

One of the great American lies is that profitability is the direct byproduct of ruthlessness. Donald Trump’s entire campaign was based on this idea, that success only comes by fucking other people over. But, time and again, this theory has been proven wrong, and it kills me that the NFL—which is purportedly run by intelligent businessmen—doesn’t realize this. It kills me that, with ratings going into the fucking toilet, they haven’t thought to blame their own leadership for it. As it stands now, this is a Neanderthal league with a Neanderthal in charge.

What is truly lost by replacing Goodell? Oh, is he some legendary hardass at the negotiating table? You can hire pretty much any asshole, white-shoe lawyer to fill the exact same role. Apart from squinting menacingly while bargaining, what else does Goodell do except botch suspensions and awkwardly hug draftees who will come to loathe him? There’s virtually no risk at all in replacing him. And the upside of hiring a good-natured replacement is staggering. For fans like me, it would be like walking out of jail. BREATHE IN THE FRESH AIR! BASK IN THE WARM SUN! Who knew life could be so fucking glorious?

This shit ain’t hard. Any mid-range exec would be an improvement over the current NFL commissioner … someone with the common sense to step in, simplify the catch rules, and QB roughing rules,  re-negotiate disciplinary measures with the union (and get more offseason practice time in return), ease up on celebration penalties, ditch replay, fire Phil Simms, and keep a low profile. PRESTO … instantly better football league. Every year that Goodell remains in charge does incalculable harm to the NFL and its reputation moving forward. You can get away with presiding over a bloodsport if you’re just NICE about it! Someone put Joe Biden in charge of this shit so that the NFL can make its babyface turn.