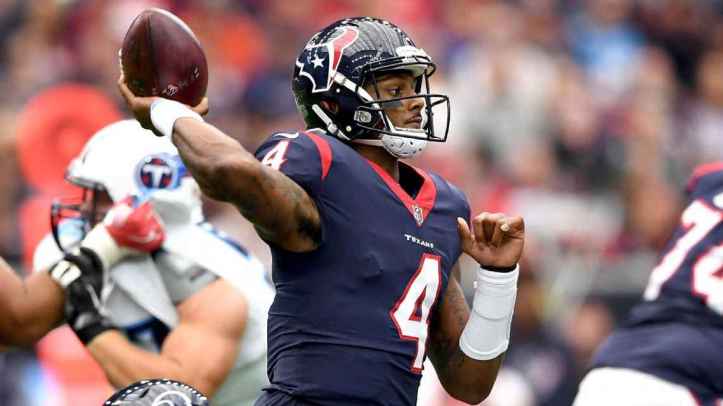 Welcome to Toad’s Fantasy Football Weekly Review,  where I summarize the aftermath of the past Thursday through Sunday games, but more importantly ten thoughts and their lasting fantasy impact.

It was a week full of ugly football as many games played out as expected but to brutally ugly results. Injuries messed up a lot of what could have been better games, which in turn would have given us fantasy football players more to be excited about. But as we break down another week of NFL football, we are reminded that while it’s not always pretty, there’s always something to learn that will help us down the road.

1. DeShaun Watson is making a lot of GMs look foolish

Paging fans of the Cleveland Browns, Chicago Bears, San Francisco 49ers, and even Kansas City Chiefs. All of them will be second-guessed if what we’ve seen out of Watson the last two weeks is just a taste of what is to come. Consider this, Watson has been able to turn around this offense with only having DeAndre Hopkins and Lamar Miller. Watson’s first start was a win on sheer guts by him and his legs. His tight ends have been banged up and he just got Will Fuller back in the fold this past week. Needless to say, this is probably the last week you’ll be able to grab him off waivers if he’s not already taken.

2. The Cardinals are stuck in throw only mode

I was asked a lot by people about Carson Palmer and I repeatedly gave this bit of advice. They have to throw, there’s no run game to speak of and their best running back is Andre Ellington whose biggest contribution is… catching the ball. This doesn’t mean that the Cardinals are going to score a lot of points though. Since losing David Johnson, they’ve failed to reach 20 points for the third straight game and have squeaked by with two overtime wins to the Colts and Niners. I also felt that Phil Dawson would have a big game because as good as one dimensional teams are, they cannot convert every time when that’s all they have. More on this below.

The Cardinals defense lost a big impact player for the year. Markus Golden led the team in sacks in 2016 with 12.5 sacks. He might have suffered a torn ACL or MCL, and we’ll get confirmation as the week goes on, but the Cardinals already have lacked a pass rush, tied for 19th in the league with just 9.0 sacks. Golden didn’t have any this year, but he is their best pass rusher and that leaves opposing offenses more time to throw the ball, as long as it’s away from Patrick Peterson.

4.  Derek Carr injury is not season threatening and the rest of injury landscape

In trying to figure out matchup play, it’s important to understand if a defense is truly that good in (fantasy terms) or if the opposing offense is that bad. For example, defenses like the Broncos, Bills, Vikings and the Seahawks are good, all-around defenses so they’re hard to run and throw against. They’re also good no matter the matchup as DSTs. In turn, offenses that are truly bad, and I mean leave-a-bad-taste-in-your-mouth bad, include the Ravens, Browns, and Colts are really that bad, with very few redeeming fantasy players and it’s best to stream defenses playing them when possible. Those are the easy decisions and while it doesn’t always take a full month to know who’s who, that sets up the quick and easy streaming situation for several fantasy positions for the rest of the year. But let’s take it one step further…

6.One dimensional defenses and offenses

To take the last step further, let’s illustrate one dimensional offenses and defenses. This is the one that’s actually more important because sometimes you’ll see fantasy owners steer clear of the wrong matchups because of a misunderstanding of the matchup.

For example, the defenses of the Jaguars, Redskins and Steelers can defend the pass, but you can run on all three of them. You start your running backs against them even though the overall matchup is tough. Defenses that can control the run, but not the pass? Look at the Bucs, Eagles, Cardinals, to throw your quarterbacks, receivers and tight ends at. It’s not an exact science but it’s a quick and dirty rule that’s reliable in the first month of the season.

And the offenses? The Jaguars, Ravens, Dolphins and Bills are generally weak passing offenses, but their run games are rock solid and consistent. Bad rushing attacks that in turn yield high passing numbers? The aforementioned Cardinals, are joined by Giants, Packers, and Chargers. This latter tidbit is usually attributed to injuries or bad offensive line play or a combination of both. Every team tries to run the ball well, but some teams just can’t due to a few circumstances.

Remember, these are the one-dimensional teams for the month of September. Will these teams stay one-dimensional the entire season? Probably, and probably not, good teams adjust… but really only if they have the personnel on their roster. This requires a rookie or developmental player to flip the switch. Or game plans change according to available personnel. That’s what the Patriots do each year and it does take time to discover that next man up. That’s where you have to keep persistent in recognizing when a team irons out its wrinkles, otherwise, you know their Achilles’ heel week-to-week. But this information gathered in September should carry you through the next couple of weeks at the least.

7. What about the kickers?

So what’s the trickle down effect to this one-sided talk? That’s one of the major factors you look for when you’re trying to figure out which kickers to stream. These one-sided offenses are often times the teammates of the kickers best to own because they’re consistently in the red zone, but they just can’t finish due to the lack of balance. On the flip side, you’ll want to see these one-sided defenses and also find kickers playing against these defenses since they’ll keep teams in the game, as long as they have a strength that they can’t defend well that gives them opportunities. It’s what I often use to figure out who I want to stream against for kickers, defenses, and this information helps me with my start and sit recommendations. So understand the matchups but know what the identity of each team is first.

8. So long, Mike Glennon, we hardly knew ya!

The Bears have gone as far as they wanted to with reclamation project, Mike Glennon and realized they probably overpaid for him after seeing him have another game with more turnovers than touchdowns. Had the team been 2-2, we might not have seen this coming but they’re hoping Tribusky can turn the team around and if not, give the kid experience. Now they’ll have a month to evaluate Mitch Trubisky as the rookie quarterback has to make the best with a bare cupboard. The receivers on this team are bad, real bad but we’ll see if Trubisky is able to elevate the play of his teammates and stay away from interceptions. To be fair, Glennon didn’t have any receivers to work with after his top two targets went down with season-ending injuries.  It may be best if you’re a Tarik Cohen or Jordan Howard owner, to let the dust settle for a week or two before finding out what the kid can do.

Sean McVay didn’t fix Jared Goff, he fixed Todd Gurley
The development of Goff is still on its way and we don’t know yet how truly good or bad he’ll be. We know now though that he can play, and as we learned last week, he’s at least worth streaming. But that’s not the biggest change in the Rams’ offense. Head coach Sean McVay not only set Goff up to get rid of the ball quickly, he got Gurley the ball in space and added a greater workload to his responsibility.

Gurley caught 21 passes for 188 passes during his rookie season. He caught 43 passes for 327 yards in 2016. With just four games, Gurley has 20 passes for 320 yards and his first three receiving touchdowns of his career. After having five 100-yard games out of 13 games in 2015, he had none in 2016 and two already. He averaged 19.2 touched per game as a rookie, which increased to 20.0 touches last year. Gurley is averaging 26.5 touches per game for the month of September. So while I’m all for giving the credit to Goff, Gurley’s turnaround is what’s putting the opposing defense on its heels and forcing teams to throw against Wade Phillips’ aggressive defense.

Another popular question I am fielding is what to do with the Texans’ backup running back. After the blowout against the Titans, Lamar Miller re-established himself as the starter, but that just means the casual fantasy player will back off of Foreman, making him easier to swipe.

The thing is that Foreman has at least 10 touches for three straight weeks and is averaging 4.97 yards per touch. Unfortunately, he’s not worth a fantasy start until he starts getting into the end zone or Miller gets hurt. He’s in a Derrick Henry situation. But, Foreman has earned handcuff status or a deep league stash at the very least on 12-team and 14-team leagues.