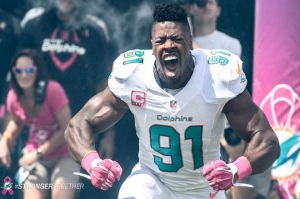 Do not let anyone tell you any different folks. The NFL (and fantasy football) is a passing league pure and simple.

There are no two ways about it and if you don’t believe ‘ole Toad let me toss out a few numbers from Week 6.

I know. I’ve said we won’t bombard you with stats and such with this piece but these are too good to pass on.

With only the Monday Night Football game remaining there are 15 wide receivers that totaled over 100 yards receiving this week. Seven of those receivers went for over 130 receiving yards.

By contrast, there are a total of seven running backs that reached 100 total combined rushing and receiving yards.

Enough of those pesky numbers but you get the idea.

Here are some things that stood out to Toad this week.

So, basically Peyton Manning is to this years Denver Broncos team what Trent Dilfer was to the 2000 Baltimore Ravens. Read this next line to the melody of ‘Nationwide is on your side.’ I think I stayed one year too long.

Ah…the Chicago Bears defense was just what the fantasy doctor ordered to cure what ails Matthew Stafford and Calvin Johnson.

Well hello, Cameron Wake. Anxious IDP owners have been waiting for you to arrive this season. One has to think that Lamar Miller likes the coaching change that the Miami Dolphins made.

What a great game from New Orleans tight end Ben Watson this week.  It appears that Watson’s performance may have lit a fire under former Saints tight end Jimmy Graham. The Seahawks could certainly use the big man from here on out.

Who were those guys playing defense for the New Orleans Saints this week?

It certainly didn’t look like the unit from the first five weeks. Seriously though. Cameron Jordan did an amazing J.J. Watt imitation Thursday night.

Wow, Devonta Freeman. Simply wow. Dynasty owners should attempt to buy-low on Tevin Coleman. It’s not Freeman, it’s the system. Coleman had 40 yards rushing on 4 carries, but that fumble killed him. Next up for Freeman are the Tennessee Titans.

So, the Dallas Cowboys are hopeful to have Dez Bryant back for Week 7 following their bye. That would be the first week that Matt Cassel takes over at quarterback. Somewhere, Brandon Weeden is shaking that over-sized head and muttering, “Oh, sure. Now Bryant comes back.”

Another week and there’s another James Jones touchdown reception…Ho Hum.

Hello there Alshon Jeffery. Your fantasy owners have been waiting for you.

Gary Barnidge is quite the overnight success, eh? It only took seven years for him to hit his stride. That is “If at first you don’t succeed”… at it’s finest. Sometimes you just gotta give those backup generators a chance… Well-done, sir.

After watching Colin Kaepernick throw for over 300 yards and beat the Ravens, I am guessing that head coach John Harbaugh’s name is going to continue to come up regarding the USC job. Or, maybe there just needs to be a Harbaugh on the field for Kaepernick to be successful? At 1-5, I am also guessing the front office in Baltimore is telling Harbaugh to “Go ahead and take that call, John.”  Meanwhile, general manager Ozzie Newsome gets a pass for putting a team on the field that has 36-year-old soon to be retired Steve Smith, Sr. as its top WR, one-hit wonder journeyman Justin Forsett as its top RB, Crockett Gillmore at TE with Kamar Aiken and Marlon Brown rounding out the WR corps. Yeah, gotta blame the coach for not being able to put all those pieces together.

Navorro Bowman has another huge week with double-digit solo tackles for the second consecutive game. Hopefully, that injured knee can hold up all season because the man is fun to watch.

Julius Thomas may just retain his fantasy value in Jacksonville after all. He looked pretty good this week (except for that pick-six he was a part of for the Texans) and could become a vital weapon for Blake Bortles.

That was a very nice game by the Carolina Panthers going into Seattle and winning. Maybe it’s time for Pete Carroll to be heading back to college? The fact that Greg Olsen caught the game-winning touchdown should surprise no one. Including the Seattle defensive coordinator. How did Olsen get behind everyone? Not just on that play but all day long.

That fourth down debacle of a play by the Indianapolis Colts in the third quarter (why did you snap the ball?) could be the worst play I’ve ever seen. And I am a Dolphins fan. You gotta give Bill Belichick and the Patriots credit. At least when they ran that play (or one similar to it last year) they got it right. Is Chuck Pagano trying to get fired? Still shaking my head. At least Andrew Luck played and looked pretty good. Well, except for all those high throws. Hey Colts fans, I’m trying. Nobody has any sympathy for a franchise and its fans when they go from Peyton Manning to Andrew Luck. Nobody.   LeGarrette Blount simply owns the Indianapolis Colts. He scored a receiving touchdown? Really? That’s just rubbing it in.

Did we really have another game with no sacks for J.J. Watt? To quote Vince Lombardi, “What the hell is going on out here?” I am thinking to many commercials.

That was a gutsy effort by LeSean McCoy today at less than 100%.

Andy Dalton and the Bengals offense just keep rolling along. I am beginning to believe that we may not actually have a “Bad Andy” appearance this season. Well, it isn’t the playoffs yet ….

I also believe that Jeremy Hill will frustrate his fantasy owners all season long. At the rate he’s going Hill will amass double-digit touchdowns while averaging 3.0 yards per carry.

From the scary but true department, DeAndre Hopkins and Arian Foster are actually making Brian Hoyer a fantasy-relevant quarterback.

Hey, Washington. How long are you going to continue this Kirk Cousins experiment? It’s over. Trust me. It’s over. He is what we thought he was (all apologies to Dennis Green). If you haven’t seen the cartwheel touchdown catch by the Bengals Marvin Jones you need to. No, seriously…I will wait until you go and look it up, allow me to supply you with the link  Nice, eh?

We aren’t still waiting for that Jordan Cameron breakout game are we?

Forget about “Big Ben” to Antonio Brown. The Steelers now have Landry Jones to Martavis Bryant.

It’s too bad that Keenan Allen went out with a hip injury because San Diego was poised for a nice road upset of the Packers. They still had a chance to win the game late but the Packers weren’t going to be fooled by those sneaky Danny Woodhead red zone runs.

I am a fan of “The Talking Dead” which airs following episodes of “The Walking Dead” each week. There is a segment called ‘In Memoriam’ where they show Walkers (aka: zombies) and characters that were killed on that episode and say a farewell. Here at The Toad Zone we are starting an “In Memoriam” for fantasy football dealing with players we can say goodbye to (aka: they can be dropped in all league sizes). Let’s bid a fond farewell to Michael Vick as even if ‘Big Ben’ continues to miss games it will be the aforementioned Landry Jones at the helm for the Steelers. It’s time to hand C.J. Anderson his coat as it’s not going to happen for him this season. We will always have the memory of 2014 for Anderson.  Oh, yeah… and all the wasted 2015 first round draft selections of him.

It appears that the Minnesota Vikings have their MLB for the future in rookie Eric Kendricks as he posted double-digit total tackles and a sack this week. Nice job young man.